Helpful Links for the Challenge

I think part of the lesson of The Challenge is teaching me that when you commit to something, you keep at it despite being exhausted: emotionally, mentally and physically exhausted. You put one foot in front of the other and finish the task. Tonight- I'm seeing the live action Oscar Shorts.


- Posted using BlogPress from my iPhone

I asked my fellow movie-goer, and another player in 'The Challenge' if he thought they titled the movie 'Biutiful' because ironically it wasn't. What a rough watch that was, and I've sat through some rough watches this season.

I drove home desperately wanting some warm milk to calm my stomach. I hoped fervently to fall asleep and dream of anything but the sights from that movie. I kept waiting for a resolution at the end of the film... a happy one, a sad one, a hopeful/balanced one. There wasn't any. I was left staring at the screen at the as the credits rolled, doubled over in hysterical laughter because any other response would have sent me looking for an oven to stick my head in. I'm sorry, that's awful, but that's how strongly I reacted to this movie.

In an effort to be open-minded, I attempted to look for the positives. When I couldn't find any, I attempted to understand why film festivals and the Academy were drawn to this offering. Firstly, Javier Bardem is amazing. Any actor able to carry a film like this and shoulder the burden of this intense material (and still look handsome through it) deserves some major awardage. Secondly, I think the film is such a wake-up call, to many who feel our crosses are heavy, that it could be so much heavier. In developed countries, without educating ourselves, we have NO idea of the traumas suffered daily by those in underdeveloped and corrupt areas if the world.

I would love to pursue an education in world cinema. I am missing a body of knowledge that helps me understand the random, multiple storylines and morose auras of foreign films.

It's in moments like these that I begin to question why I am doing The Challenge at all.


- Posted using BlogPress from my iPhone 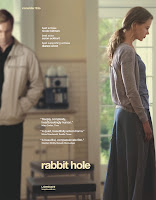 I began my morning at 4 a.m. today and watched "Rabbit Hole" starring Nicole Kidman and Aaron Eckhart before the sun came up.  My wondering here is why Kidman was recognized with a nomination for her role, but not Eckhart?  Is it harder to play restrained than emotional?  Is it harder to forgive than rage?  As I told I friend, it is very hard to figure out which character to empathize with when the subject matter is so unthinkable that you hope you'll never be able to feel empathy for their situation.

I followed RH with a viewing (finally) of "Exit through the Gift Shop."  I love the title almost more than the movie, because it says so much to me.  I, like many I'd imagine, am not a fan of the way amusement parks give you an exciting and fun experience, and then rob you of it by commercializing that experience as you exit through their gift shop.  I would think that my irritation at that commercialization is only a fraction of the anger these street artists feel at their craft being hijacked by an opportunistic weirdo.

Count as of today in The Challenge:  25 out of 56 films seen, 4 categories viewed in its entirety.  Seeing "True Grit" will help me close off 6 more categories.  I'm not sure why I'm delaying viewing that particular film.
Posted by Betay at 8:30 AM No comments:

Staring out at Wilshire... 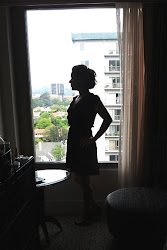 Betay
Just a lady who loves the art of filmmaking, and is coming to realize that she missed her calling somewhere along the way. This blog is a baby step towards reclaiming lost dreams and reframing them for my current life.